Eve Callaghan (Enniskillen) took part in the Apex Clinic Tennis Championships at the David Lloyd Centre in Belfast last weekend. This event attracts many juniors from all over Ireland and Eve was seeded number 1 in U14 Girls Singles.

Eve initially played Sophie O’Connor from Sutton (Dublin) and with her powerful forehand and the use of sharp angles cross court comfortably took the match 6-1 6-1. In the semi-final, Eve faced Cara Flynn from Riverview (Dublin) taking the first set with ease 6-1. However Cara fought back strongly in the second and it went to a nail biting tie break at 6-6. 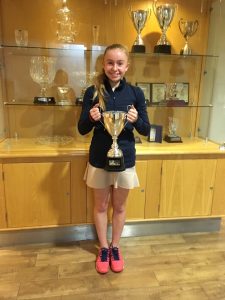 Eve’s mental toughness was tested to the full, but like many times before, she proved that she’s a player who can handle the big points exceptionally well and Eve took the second set 7-6. Eve then met number 2 seed in the finals Zara Burns from Dundalk. Once again, Eve put in a convincing performance to win the match 6-1 6-4 taking the U14 Girls title. Her coach Louise McGann took great pleasure from Eve’s performance and feels her game has benefited greatly from the increased intensity she has shown over the past year.