At a recent event organised by Enniskillen Tennis Club and sponsored by Lakeland Veterinary Services (Derrygonnelly), 16 children from all across Ireland took part in a very successful Tennis 10’s event.

In the U8’s Blake Chambers from Ballybofey won all his matches. His brother Corey along with Aine Rice, Garazi Biritxinaga and Cormac King from Enniskillen played some wonderful tennis including many lengthy rallies.

Ben O’Connor from Sligo and Justin Smith (Irvinestown) joined James Robinson and Kaelan Deery both from Enniskillen in the U9’s. All showed great promise and a healthy attitude towards the game. This time it was Kaelan who won all his matches. 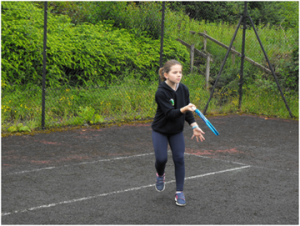 The U10’s saw Shay Sweeney from the City of Derry tennis club excelled in this group. Other close contenders included Aoibheann King, Rory Smyth from Enniskillen and Lennon McLaughlin from City of Derry. Uxue Biritxinaga and Morgan Whittaker, both Enniskillen, were playing in their first tennis tournament and gained valuable match play experience and along with Angelina Gcado from Irvinestown enjoyed close competitive matches.

Enniskillen coach Matthew McGann oversaw proceedings ably helped by some of the clubs junior members. He was delighted to see so many young tennis players travelling to take part in this fun event and thanked Innes Redmond of Lakeland Veterinary Services for his generous sponsorship. It was apparent to all those that watched the proceedings that these young players have a bright future in tennis ahead of them. Don’t forget Andy Murray started out this way less than 20 years ago!